How Emotionally Focused Therapy Can Save and Transform Your Marriage 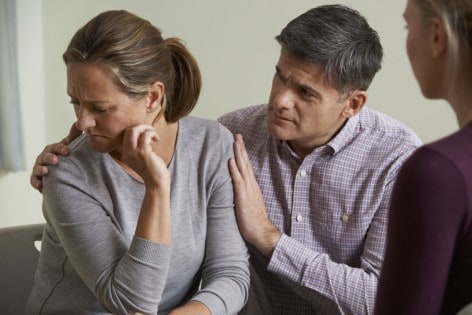 I will never forget the day I sat wide and teary-eyed in my Emotionally Focused Therapy (EFT) externship. I watched as Sue Johnson, co-founder of EFT, worked live with a couple, exposing us to the EFT process. It was like nothing I had ever seen before. None of my previous therapy training had prepared me to empathically enter the fray of emotion so common to escalated couples.

But there I was, just a year after losing my own 26-year marriage. While I needed the continuing education credit, the truth was I was in that room to make sense of my own relationship failure. I remember driving away from the training and phoning another therapist to tell him that this form of therapy might have saved my marriage.

Fast forward 10 years. I am now remarried and have become a certified Emotionally Focused Couples Therapist. What I have learned has transformed my second marriage as well as the majority of the relationships that come to me for help.

EFT has been proven to move 70-75% of couples from distress to recovery and help 90% make significant improvements.

It is no accident that EFT works. It is backed by 30 years of rigorous research. It works because of its focus on emotion.

Wouldn’t you agree that it is difficult to love someone if you have negative emotions? While the willpower to stay committed to a relationship is important, commitment alone will not protect or grow your relationship.

Emotionally disconnected unhappy couples eventually have problems with depression, addiction and affairs that threaten or destroy the relationship. These issue often look like the problem of one member of the couple. But these problems belong to the couple.

By repairing their hurt emotions, couples are empowered to feel secure enough to transform their relationship.

Every couple in relationship trouble has emotional injuries that they are trying to overcome. The sad thing is that what they do to protect themselves and the relationship usually makes it worse.

Few of us grew up with healthy examples of how to productively work through emotional conflict. There is no relationship that is more emotionally charged than a marriage. We feel extremely vulnerable when half of everything that we need for security is in the hands of another person.

Couples often argue about small things because they feel insecure in the relationship. Surprisingly, we are often unable to recognize and label that feeling of insecurity in our closest relationship.

Emotionally Focused Therapy helps couples repair and transform their relationship by helping them identify and express their attachment emotions.

EFT is built on the attachment theory of John Bowlby, who said that, from cradle to grave, human beings need to have a secure loving attachment bond with at least one other human being.

Most often couples argue because they feel like the loving attachment bond that they have formed with their partner is being threatened.

EFT therapists are trained to recognize and help couples both express and have empathy for each other’s insecure attachment emotions. This is the healing balm that makes problem-solving easy.

While a lot of therapies start with problem-solving, EFT therapists skillfully help couples focus first on healing the roots of the emotional mistrust.

When couples learn to care for and repair each other’s attachment emotions they are equipped to love for life.

Click here to find an EFT therapist in your area.